The rebuild of County Road 151 across three townships has been honored with two awards.

The Monroe County Road Commission received the national Asphalt Recycling & Reclaiming Association’s 2016 Award for Excellence in full-depth reclamation for the project. In addition, the road commission and Gerken Paving Inc. received an award of excellence from the Asphalt Pavement Association of Michigan.

In 2014, the roadway received a multimillion-dollar improvement to the 10.3 miles of the crumbling highway that was built in the 1960s as an experimental road. The road commission received $5 million in state funding to help with the project, which used recycled asphalt to repave the highway and crushed concrete from the road for other projects in the county.

“I don’t know if this has been done before,” Scott Assenmacher, county highway engineer for the road commission said of the project. “It was unique to us.”

The road, which passes through Erie, Bedford and Whiteford townships, was the key primary road targeted for funding and repair in 2014. Bruce Wehr, a representative from Asphalt Materials Inc., which provided material for the project, submitted the rebuild for the national award.

“For around here, it was a new way to rebuild a road completely using existing rock source millings,” Mr. Wehr said. Using recycled materials for the road was a decision made based on funding, and “conventional construction” would likely have been too costly.

Instead, the full-depth reclamation project included the removal of the failed cement concrete and the construction of 8-inch asphalt pavement and an aggregated base with an engineered asphalt emulsion.

Engineers researched the best method to repair the road. Repairs were discussed for years but were unable to happen due to a lack of funding.

“It was neglected for over 50 years,” Mr. Assenmacher said. The recycled materials from the project then were used on Wasbash and Tuttle-Hill Rds.

Kristen Brown (left photo) poses with her son, Matthew, on County Road 151 (Samaria Rd.) in front of K& B Plants, the business owned by her parents, Bill and Karen Albring, after the road was redone. County Road 151 is shown looking east of Jackman Rd. (above) prior to the construction.— Monroe News file photo 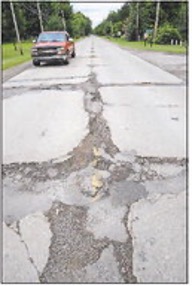 For around here, it was a new way to rebuild a road completely using existing road source millings.”

The upgrade on the road should last about 20 to 25 years. The technique could be used by the road agency in the future. “It’s a realistic technique to be used in the future,” Mr. Assenmacher said.

“Ida West Rd. will be a big project so it could be a similar situation.” The way County Road 151 was rebuilt, while new to Monroe County, isn’t new to other agencies.

“It’s been around for decades,” Mr. Wehr said. “ The problem is there isn’t the willingness to do this in Michigan as in other parts of the country.” Mr. Wehr said that is one of the reasons why his company submitted the road commission for the award.

“It seemed to be award-worthy because of its complexity,” Mr. Wehr said. The state should look at this project, Mr. Wehr said, and model others after it.

“I personally think the state is doing itself a disservice by not looking at this in depth to use in other areas,” he said.

Other states, including Iowa, California, North Dakota, South Dakota and Wyoming are among the states that often use recycled material to repair other roads.

“ The Great Lakes states are a bit behind the curve with this,” Mr. Wehr said.

Mr. Assenmacher called the project a collaborative effort and thanked the road commission’s leadership, contractors and legislators who worked on it.

“Because MCRC leadership has allowed the staff to think outside the box, we are willing to try just about anything once,” he said.

“There will be some failures along the way, but you won’t know unless you try. However, the successes in cost savings and improvement life using different treatment options outweigh the bad. Samaria Rd. is a great example of one of those successes and it is being recognized for it both at a state and national level,” said Mr. Assenmacher.