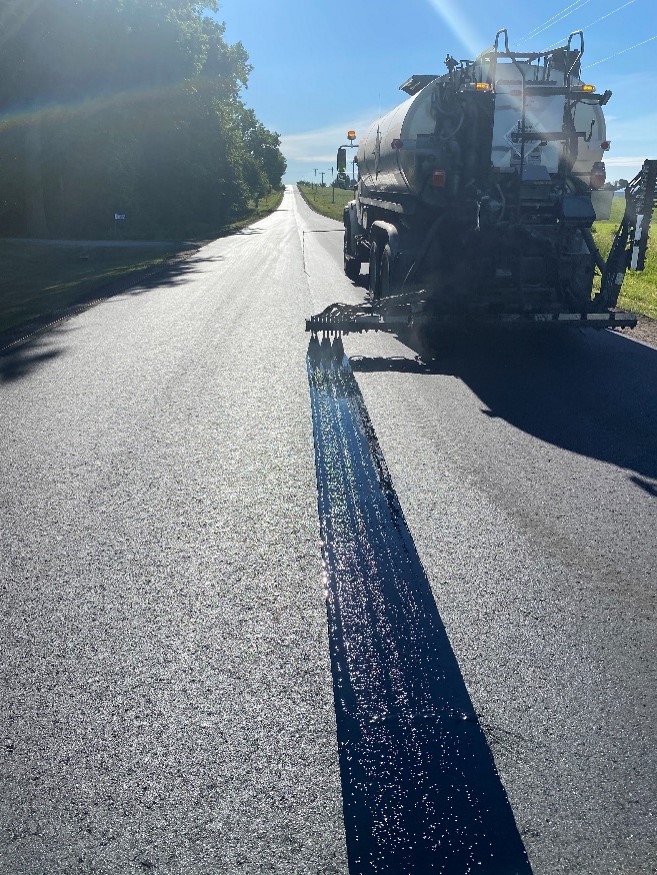 Many states are looking for methods to improve longitudinal joint performance of their pavements, since these joints often fail before the rest of the surface. With the inherently lower density at the longitudinal joints we often see pavements fail by cracking, raveling, and potholing. Lower density is synonymous with higher air voids which leads to premature failure of pavements due to the intrusion of air and water. Studies have shown that longitudinal joints in pavements are often the weakest areas of a road. (1)

Several state DOTs (Department of Transportation) are now using a materials approach to seal the longitudinal joint region by filling these air voids with asphalt content from the bottom up.

The materials approach is referred to as VRAM(2), a Void Reducing Asphalt Membrane.  VRAM is a highly polymer-modified asphalt cement that is placed at the location of a longitudinal joint before paving. As mix is paved over it, the VRAM melts and migrates up into voids in the low-density mix, making the mix impermeable to moisture while sealing the longitudinal joint itself.

Illinois Department of Transportation (IDOT) test pavements were evaluated after 12 years and found to have longitudinal joints that exhibited significantly better performance than the control joint sections and were in similar or better condition than the rest of the pavement. Laboratory testing of cores showed decreased permeability and increased crack resistance of mix near joints with VRAM as compared with similar mix without VRAM. The life extension of the joint area is approximately 3–5 years, and the benefit is calculated to be three to five times the initial cost.

This project’s VRAM application began at 8:05pm with ProTack operating the 05-distributor shooting from the driver’s side. They started at address N3362 in the eastbound lane. Ambient temperature was 61F and existing pavement was 80F. ProTack applied a straight and consistent line throughout the project. VRAM width was measured with an average of 18 inches. (3)

J-Band® is a VRAM product from Asphalt Materials, Inc. and was created in the labs of the Heritage Research Group.

J-Band has been helping roads last longer since 2002. VRAM has been used in 20 states and the District of Columbia.