The 2014 construction season was a banner year for the Monroe County Road Commission (MCRC) with nearly 190 road miles seeing improvements ranging from preservation to rehabilitation.  Combined efforts of the Road Commission, Townships, federal/state funding and other Stakeholders helped to make these improvements possible totaling nearly $12.8 million of investment into our county road network.  Among the roads improved in 2014, the spotlight project topping the list was the rehabilitation of the County Road 151 corridor.

50 years has passed since County Road 151 was reconstructed in 1964.  The MCRC took jurisdiction of the over 10 mile stretch of roadway from the state of Michigan on November 15, 1965.  This critical link of the Monroe County network of roads connecting US23 and US24 received needed funds through the Roads and Risk Reserve (RRR) fund program in 2014.  The route is now open to traffic for all to enjoy.

The MCRC was asked to produce a prioritized list of road and bridge infrastructure improvement needs for consideration for the RRR program in July of 2013.  In December of 2013 a press conference was held at the Road Commission where local legislators announced the projects chosen to utilize the funding.  The MCRC was awarded five (5) projects including the County Road 151 rehabilitation project which included stretches of St. Anthony, Secor, Samaria and Lakeside Roads.  The official award letter from MDOT was received in early February 2014.  The MCRC Planning & Engineering division began the process of developing a scope of work to maximize road life longevity within the inadequate funding granted by the State for County Road 151.  With the assistance of Heritage Research Group, a nationally recognized materials testing and research consultant, the engineering group proposed a full depth reclamation project. 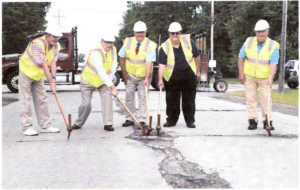 The first step in preparing the road for the reclaim process, the existing deteriorated full depth concrete pavement needed removal.  The unique process the winning contractor proposed was to break the concrete road with a rubblizer followed by crushing the broken concrete in place.  An innovative machine was brought in to accomplish this, called an Iron Wolf.  The Iron Wolf is basically a loader with a rototiller on steroids mounted to the front.  The concrete was crushed to a size small enough to pick up with a cold milling machine.  The crushed concrete was milled directly into gravel trains and trucked to the MCRC Dundee yard where the material would be further processed for use on surrounding county roads; of which some was used as base for the Tuttle Hill Road rehabilitation, also a RRR project. 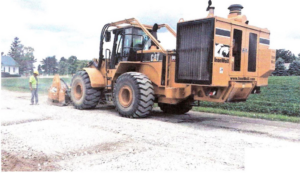 Once the concrete was removed, along with some drainage crossing improvements, the bulk of the corridor consisted of a full depth reclamation process.  This technique consists of importing screened and sized recycled asphalt millings and pulverizing the millings with a portion of the existing aggregate base layer to a specified depth and maximum size.  During the pulverization process the millings and stone are mixed with a specialized engineered emulsified asphalt, graded and compacted, resulting in a thick, stabilized base for asphalt leveling and wearing courses.  This process allowed for recycled materials to be utilized to significantly improve the County Road 151 corridor for the future while keeping the project in budget and providing county-wide benefit with the recycled concrete.  This was truly a very ‘green’ process. 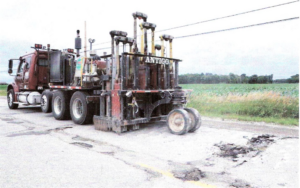 The County Road 151 project was bid in June of 2014 and the winning contractor, Gerken Paving Incorporated broke ground on June 23, 2014.  The 19 week project was completed on time and on budget and today, the corridor is open to traffic for a beautifully smooth east-west ride through Monroe County.

As the MCRC staff develops the 2015 list of projects, be sure to visit our website and see our Construction Projects seciton and take a look at our projects map.  This map will be updated regularly as projects are anticipated and added to the program. 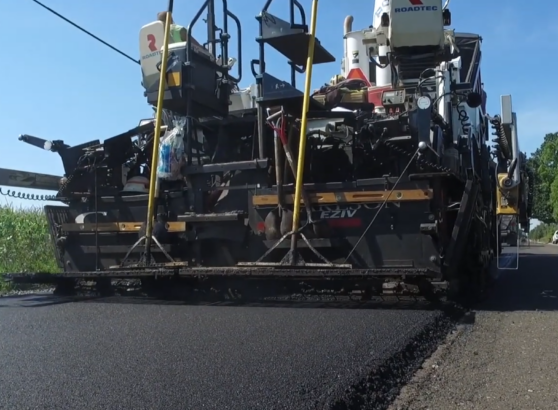 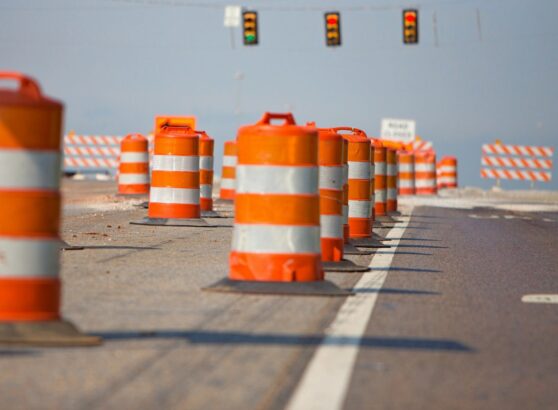 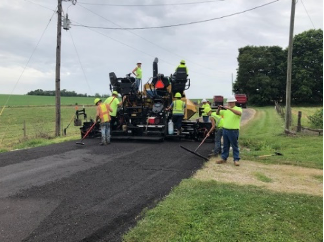